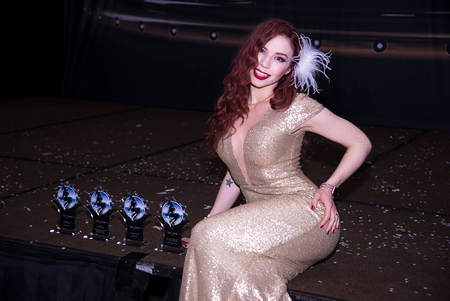 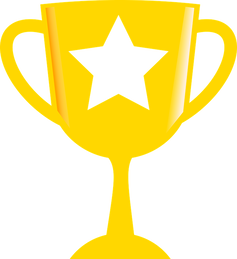 CLICKING ANY LINKS OR PAGES ASSUMES
​YOU ARE OF LEGAL AGE TO DO SO.

About Ludella...
​**Please note this bio is a few years outdated and will be updated soon! Ludella is now based in NH and works solely on her own fetish production company Dark Magic Productions as well as creating exclusive content for her Patreon.

Ludella Hahn is a full-time model, actress, and burlesque showgirl based in Boston, MA and traveling worldwide. Ludella is a fiery haired, blue eyed, ivory skinned beauty with a curvaceous hourglass figure at 37″ – 25″ – 39″ and a DD cup. She is most known for her playfulness and professionalism as well as her ability to play many different characters. She carries the burlesque tagline “the dame with the delicious derriere” because of her voluptuous bottom. She is a regular model for retro clothing company Heart of Haute    and retro apron company Cupcake Provocateur, and she is sponsored by What Katie Did lingerie. She has also modeled for many of the top designers and companies in the retro and fetish scenes, including Fables by Barrie swimwear, Dawnamatrix Designs Latex, Vengeance Designs Latex, Glamour Boutique, Cinched Tight Corsetry (Toronto), Torture Couture, Sourpuss Clothing, Love Kills Clothing (London), and Vivien of Holloway (London), to name a few.

Some recent publications for Ludella include a cover and 15 pages in Bizarre Magazine  issue 210, a cover and 24 page interview/pictorial in Retro Lovely Magazine’s Taboo Edition  issue 6 photographed by the legendary Viva Van Story; a cover and 6 page feature including centerfold in the UK’s Tease and Cake Magazine  issue 4 followed by fellow cover-girl Dita Von Teese; covers and features for Sinical Magazine   issue 9,  Delicious Dolls Magazine Spicy Issue  June, and Rat Rod Magazine‘s Feb/Mar 2013 issue; an eight page pictorial in Retro Lovely Magazine Taboo Edition  issue 5; the cover of Heartbreaker’s 2013 Spring and Fall Catalogs; her regular column in  Atomic Bombshells Magazine  (which began in issue 5); cover of Tease and Cake Magazine’s  2014 Calendar (available at www.onlinecalendarshop.com and www.teaseandcake.co.uk) and the cover/feature in Temptress Magazine  issue 5, to name just some of her more recent print highlights. She is also currently a billboard model for Old Sled Works in Duncannon, PA featured on multiple billboards, has modeled for a HSN segment on Girdlebound which aired last July, and recently released an instructional dvd called Pinup Secrets (available at www.PinupSecrets.com). Find her full resume and  press clippings here.

Having been trained in the studio in jazz, ballet, tap, and modern during her school-age years, modeling became her new form of dance in the midst of college, where she dabbled in it for the sense of possibilities it provided to a gal who never liked the idea of “growing up.” There’s adventure in the land of the lens where one can go from mermaid to madman in a click, and Ludella is always looking for that next great adventure with passion pumping through her veins and a bit of mischief in her gaze. Because of her training in dance, she brings a unique grace and expressiveness into her performances in modeling and burlesque.

Ludella began her burlesque career in Maine in June of 2009 by performing in Atomic Trash’s bi-monthly show at Geno’s, where she performed regularly until her move to Boston in 2011. It was her entrance into performance dance as an adult. Since her move to Boston, Ludella has made regular appearances performing with Vice Versatile’s “Personae” at Jacques Cabaret and with Wasabassco Burlesque in New York City. She has headlined many burlesque and fetish events including Dallas Fetish Ball, The Lone Star 13 in San Antonio, Fort Worth Stomp in Fort Worth, Texas, Circo Phantasmagoria in San Antonio, Texas, the Official Fetish Con Ball in Tampa, Florida, the Sinical Ball in Houston, Texas, and the Floating Fetish Ball in Boston. She has performed in Boston’s burlesque ballet spectacular The Slutcracker for three seasons.

Though modeling and burlesque are Ludella’s main careers, she is an actress as well. She acts most often for fetish production companies, including Damsels in Distress Visual Productions where she has been working since 2008, but occasionally dabbles in television and film. In 2012 she worked alongside John Barrowman, William Sadler, and Edoardo Ballerini as the burlesque dancer “Ada” in the ABC Studios television movie “Gilded Lilys," and she played supporting actress “Anette” in Ama Lea’s giallo short film currently in post production to release this year, as well as the character “Bambi” in television series Boston Massacre. 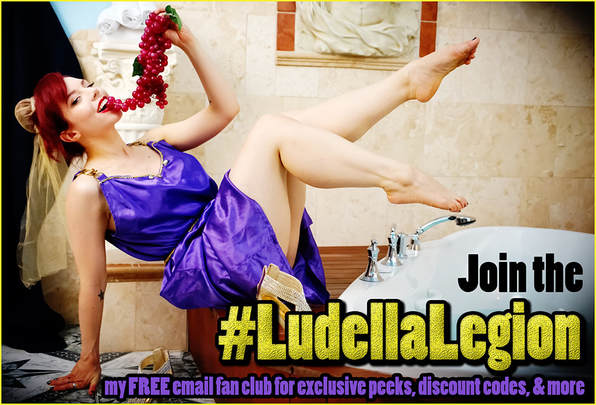